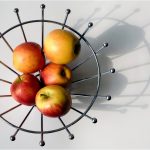 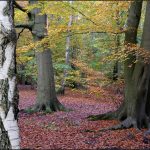 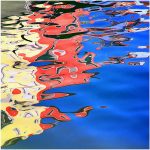 All round photographic skills were rewarded by Ilkley Camera Club on 20 November when its Rundle Trophy was awarded to Len Downes from Hampsthwaite. Members had been set the task of producing three photographs that showed a good range of their skills. Visiting guest judge, Kathy Chantler ARPS, said Len’s first image of a display of colourful apples was a beautiful still life with imaginative use of shadows. Len continued with a warming woodland scene and finished off with an abstract style composition based on a well seen reflection in a waterway.

Geoff Smith from Skipton took second place with three variants on views of a seaside sculpture taken under different lighting conditions and including a long exposure shot to produce a mysterious milky effect in the waves. Stu Thompson claimed third place with three monochrome studies that comprised a portrait, dog racing action and a seascape. Kathy highly commended entries by Katrina Brayshaw, Nick Hodgson and Peter Wilson, and commended the work of Andy Thomas and Larry James.

In the Sport and Action competition for the D W Haigh Trophy, Kathy awarded first place to Tim Sawyer from Bramhope for a fast-moving artistic shot of the Tour de Yorkshire. Phil Reeds’ mono treatment of boxing action was “well composed with clear expression and a simple background” and won him second place. Stu Thompson took third with a photo in a velodrome that Kathy said “combined sporting action and artistic presentation”. Highly commended were images by Larry James, Peter Wilson and Stu Thompson, and Geoff Smith, John Chamberlain, Larry James and Nick Hodgson picked up commendations.

Giving general advice on the entries Kathy said, “Do always look round the edges of your compositions to ensure there are no distractions. Make the viewers’ eyes go where you want them to. If something in your image is cut off, like the bottom of a cycle wheel, you either have to try again or make it clear that you meant to crop the image there. Don’t let it look like a mistake.” On sports photography Kathy advised, “Shutter speed is critical. You need it fast enough to capture the action but slow enough to show some movement so your shot comes to life.” She concluded, “It has been a delight to see so many wonderful images”.